An OPEN LETTER from women who are struggling against the destruction of Halkidiki in Northern Greece, the expansion of the existing mining activities and gold mining. 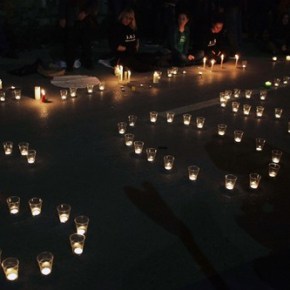 Until recently, we had never felt the burning sensation of tear gas chemicals, we knew not what antacid lotion is, we knew not what riot and special police forces mean. Until recently we believed that the Greek Police exists in order to protect citizens. We believed that the Greek State is there to promote the interests of citizens and ensure their rights.

They attacked us with tear gas and chemicals, they chased after us, they beat us, they arrested us, they interrogated us, they invaded our homes and schools. They accused us of not respecting the laws. They called us uneducated, uninformed and disobedient women, liars and even terrorists!

We endured though all this. Besides, we brought our children into this world with untold pain and we are raising them with incredible effort. We will not be intimidated by terrorizing practices.

But now they attack our grandsons, sons, fathers, and brothers. They grab them in the middle of the night, in front of our children’s horrified eyes. They lock them up in jail – as if they were common criminals – with fabricated charges.

They claim they are defending legality!
By adopting actions which violate laws and human rights?

They claim they are promoting investments, at all costs, for the benefit of the people!
By exercising violence and terror on the people?

They claim that decisions of the judicial system must be respected!
By biasing them in advance and ignoring them when they disagree?

They claim that they are defending democracy!
By challenging the presumption of innocence, one of democracy’s fundamental principles?

WE CALL ON WOMEN of all Greece, of all the world to stand by our cause. In solidarity with a struggle to defend dignity. A struggle to protect the future of our children, the environment and human rights. A struggle for life, where the lives of our children are above corporate profits. We appeal to all of you! We ask for your support and solidarity, in any form of expression!

We denounce the manufacturing of guilt and the criminalization of social struggles. We condemn police violence, state repression and procedural arbitrariness. We denounce methods of “trial and conviction by television”.

We demand the release of our fathers, our sons, our brothers. We demand immediate, fair, impartial and transparent justice.