The story of the literal and metaphorical gold mine in Skouries is quite symbolic of the situation in Greece. The project is the product of a corrupt deal that is financially as well as socially, economically, environmentally and culturally bad for both the community and the country.

Beyond its immediate human impact, the Skouries project concerns me for four reasons:

The Greek state both bought the mining licence back from the previous (Canadian) licence-holder, TVX Gold, and sold it on to a Greek mining corporation, Hellenic Gold (Ellinikos Chrysos (Ελληνικός Χρυσός)), for £9.5 million (plus 10% in taxes of future revenue); so it made no profit from the transaction; and Hellenic Gold may even recover its original investment through state subsidies. In return, Hellenic Gold (now a subsidiary of another Canadian mining corporation, El Dorado) got access to £7.8 billion of gold and copper. Both the villages and the state will lose money and jobs by hosting the mine.

At the time, the Bobolas family owned both the mining company and a media empire, so anti-mining protests were massively under-reported; and the environment minister who blocked the mining licence, Tina Birbili, was first attacked by the newspapers, then fired by her government. (Giorgos Bobolas’s family still have a minority stake in the enterprise.)

Beyond the benefits of corrupt favours, the corporation has illegally logged part of the forest to clear it for the open-cast mine, and illegally blocked public access to the forest; and its workers, hired thugs and riot police guard have dismantled a protest camp, and attacked protesters both in the forest and in the surrounding villages.

The mining company has exploited the crisis and employed people from five villages (even if they have no work to do), centred around Stratoni, in order to establish a bloc of dependency on (and therefore support for) the project; the ten other local villages, centred around Ierissos, form the core of the resistance and have therefore been excluded from the few benefits that do exist; so now local communities are deeply divided.

The Deputy Minister of Education has denied that Anti-Terrorism Police have questioned children, despite their own official documentation of the interrogations. And police have kidnapped and tortured children in a way that reminds their parents of the Junta. ‘[Ο] τρόπος με τον οποίο γίνονται οι προσαγωγές θυμίζει Χούντα.’

The archaeology of exploitation, domination and resistance: construction and destruction

The archaeology of exploitation and domination

The exploration tunnel from the original mining company, TVX Gold, is still open and polluted. 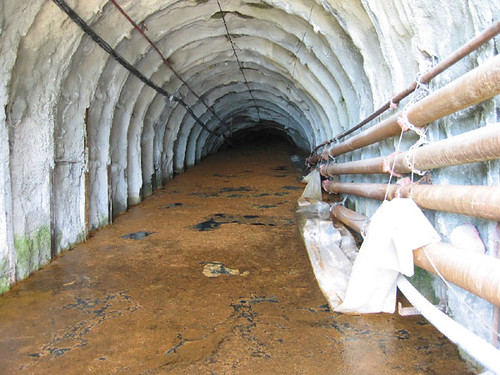 But the foundations of Hellenic Gold’s new operation have already been laid. The mine has put up barbed wire fences and checkpoints around the public forest and the mine complex to prevent protests and sabotage.

A private security guard stands amid coils of razor wire at the entrance to a gold mine complex in Skouries, in the Halkidiki peninsula in northern Greece. (c) AP Photo/Nikolas Giakoumidis (11th October 2012) 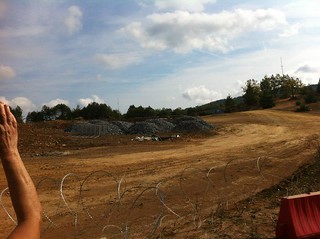 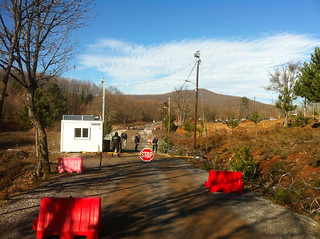 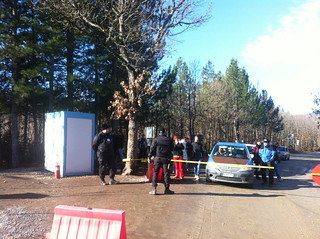 Sometimes, the police use more temporary measures, such as portable metal fences and police buses. 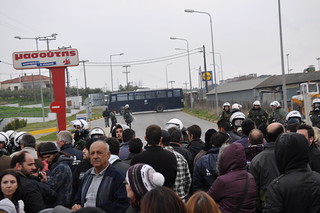 But even the waste is telling. These are a few of the many Knall flash-bang grenades that the police have used to cause panic amongst the crowds: 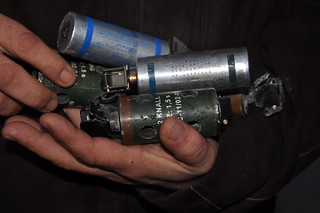 The archaeology of resistance

Just as the foundations of Hellenic Gold’s operation have been laid, so they have been overlaid with graffiti: ‘resistance to golden death [αντίσταση στο χρυσό θάνατο]‘. 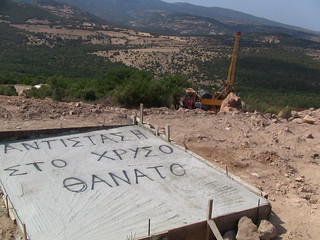 In an impressive (but naturally far weaker) mirror of the mine’s defences, reflecting the mine security officers’ and police officers’ aggression, the village has set up roadblocks to protect itself from attacks by mine workers and riot police.

The law of necessity, or the ‘lawful excuse’ to commit some damage to property in order to prevent greater harm to lives or property, is commonly accepted and often legally recognised. On 17th February 2013, masked men stormed the mine complex and used Molotov cocktails to burn company property (offices, portacabins, bulldozers, trucks and heavy equipment). The arrested suspects were charged with a range of offences, from arson to the establishment of a ‘criminal organisation‘ (which, if it translates legally as well as literally, is anti-mafia law).

As such, it wasn’t just violence against the direct targets (and their private property); it was a symbolic attack on the entire anti-mining community (including through its property). It was also a punitive expedition as, whether the cost is borne individually or communally, there will be a material cost to repair the damage.

In response to the violent kidnapping of their neighbours, protesters smashed the doors and windows of the village’s deserted police station, entered, and ‘threw everything outside and burned it [πέταξαν έξω τα πάντα και τα έκαψαν]‘, including documents, computers and furniture.

Then, the villagers closed the road into Ierissos with at least two lines of roadblocks (οδοφράγματα): first, there is a huge earthwork to stop vehicles; then, there is a pile of tyres, to burn either to stop people or to send tear gas clouds up and away from Ierissos.

Showing just how bad things are, regardless of the crisis, two mine workers have resigned on moral grounds.

Traditions of resistance to occupation

There has been region-wide resistance to destructive and exploitative mining operations for at least seventeen years; so, while protesters know when they campaign on publicly-significant dates, they campaign just the same on other, insignificant days. (Acts of destruction date back until at least 10th December 1997, when the Fighting Guerrilla Formation bombed the office of the Minister of Industry, Vassos Papandreou.)

Echoes of the Ottoman Empire

The authorities, however, have clearly (and disastrously) chosen to appropriate ancient history to excuse their present behaviour. For example, as on so many other days, the anti-mining community protested on 25th March 2012, the anniversary of the Greek revolution against Ottoman imperial rule; but the authorities chose to make that day the first time that anti-mining activism was ‘met with teargas and police brutality‘.

So, bizarrely, the authorities have chosen to identify the community fighting against mining as Greeks fighting for liberation, and themselves as Ottomans trying to maintain control and extract wealth.

Echoes of the Roman Empire

On 10th April 2013, the Minister of Public Order, Nikos Dendias, said: ‘We are facing opposition from a section of the local community that wants to impose its own law and operate like a Gaulish village’. (Paraphrased) Dendias said that protesters saw themselves as ‘feisty Gauls that take on the Roman Empire‘.

So, again, bizarrely, the authorities (the appropriately Orwellian Ministry of Public Order) chose to identify the anti-mining community as an occupied community trying to throw off imperialist domination, and the state as an occupying power trying to subjugate the native population.