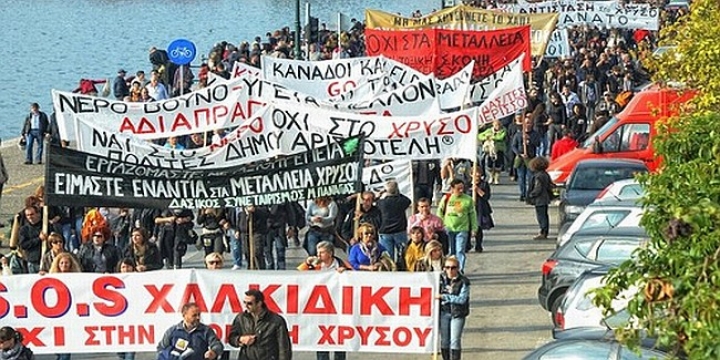 In northern Greece tensions are spilling over into violence, as controversy grows regarding the development of the Hellas Gold mining operation, also known as the Skouries project, which is 95% owned by Canadian mining company, Eldorado Gold.

In an unprecedented attack on the 17th February up to 50 people raided the mine, attacking two security guards and causing one million euros-worth of damage, by setting fire to temporary construction offices, as well as several trucks and heavy equipment.

A month previous, hundreds of people took to the streets in Athens to protest against the project, which is located in the Municipality of Aristotle, Halkidiki, echoing previous protests which took place in November 2012, where 3,000 people marched against the mine.

The situation continues to simmer against a backdrop of six consecutive years of recession and economic woes, long-term unemployment and continual bailouts from a frustrated EU. Adding to the growing animosity is news that Greece is expected to soon give the go ahead to a 230 million euro ($305m) investment from Eldorado into the Thrace gold mine, a previously dormant mine near the Hellas Gold project.

Despite the potential for a boost to the ailing Greek economy, many have differing opinions about the long-term worth of an international gold mining company working in Greece, and many disgruntled nationals say the negatives greatly outweigh the benefits.

“The situation continues to simmer against a backdrop of six consecutive years of recession and economic woes.”

Opposition was first voiced against the Skouries project when Hellas put in an application to mine the location in 2011. Since then, an ongoing battle has ensued with the people of Halkidiki, who took Hellas Gold to court last year over environmental concerns.

The court ruled in favour of Eldorado. However, opposition continues to halt operations and the mine is still waiting for some technical permits. Despite this, Eldorado Gold insists it expects to have the mine up and running by 2015.

Despite the government’s insistence that all the relevant environmental assessments have been completed and permits issued, opponents of the Skouries project fear the loss of livelihoods and irreparable damage to the environment, which encompasses 420 acres of forests that have stood for hundreds of years.

Maria Kadoglou, who runs the Anti Gold Greece website, which provides information on the impacts of large-scale metal mining, is a campaigner against the mine. She says: “We believe these kinds of projects are not in the interest of neither the local people nor the economy.”

Kadoglou says that people fear their water supply will be destroyed, as the mine is situated on a mountain that supplies the surrounding villages with water. They also fear the environment around them, which they rely on for their livelihoods, will be destroyed. Gold mining can result in a significant release of mercury, which is used to separate gold, while cyanide is also another major environmental concern associated with mining.

However, owner of mining consultancy Natural Resources, Vasili Nicoletopoulos, who is also a member of the Board of Directors for Thrace Gold Mines S.A and president of the Magnesite Group of Euromines, the European Association of Mining Industries, Brussels, since 2009, believes protesters’ views are unfounded.

According to Nicoletopoulos: “The majority of Greeks don’t know about these projects. That’s normal. They became aware because of these violent attacks.”

Lack of faith in the government stokes high emotions

As you can see by this picture there are many Greek citizens opposed to gold mining in the north of the country.

“A general mistrust of the government and lack of faith in its abilities of negotiation appear to be stoking the situation.”

Kadoglou, who says she has been accused of being a ‘moral instigator’ of the attack on Skouries by three of Eldorado’s security guards (because she is administrator of the Anti Gold Greece blog) says the attack that happened was an extreme event that she doesn’t anticipate happening again, but it was also the result of built-up tension and frustration released when Eldorado fenced off the mountain and started felling trees.

“It was evident to anyone that this anger would erupt, one way or another. ?he government and the company are trying to impose this project by force, i.e. police violence and penalisation of protest,” she says.

A general mistrust of the government and lack of faith in its abilities of negotiation appear to be stoking the situation.

The government believes the reservoir of wealth that is encompassed in the Hellas mine project will provide a leg up to help end the recession, but others feel they have mishandled the contract with Eldorado.

Firstly, they failed to negotiate royalty revenues – so Greece will only receive tax from the mine, plus jobs – and an environmental bond the government agreed for 50m with Eldorado, for any potential environmental disaster. Many feel this isn’t enough, and the situation was worsened when Eldorado admitted they had offered more to the government.

Kadoglou says she and some others submitted to the environment ministry a pack posing serious questions about the scientific validity of the permit issued. In response, the ministry said “we are not responsible to answer these questions”.

“If the ministry can’t give us an answer, then how on earth did they give the environmental approval?” she asks.

“Many also feel international corporate companies such as Eldorado are using the crisis in Greece for their own gains.”

Many protestors aren’t convinced of the benefits Eldorado’s mines will bring, which, at present, are jobs to the area – surely a positive thing when you consider Greece has a 27% unemployment rate. The four mines Eldorado owns – Skouries, Thrace, Olympus (another gold mine in development) and Stratoni (a mixed sulphide mine) – are expected to provide around 2,000 jobs in total.

Kadoglou dismisses this as outweighing the negatives. People in the area rely on tourism, farming, fishing and forestry for their livelihoods and are highly-dependent on the surrounding environment, which has not been taken into account, she claims.

“This kind of development will destroy a lot more jobs than it will create,” she adds.

Many also feel international corporate companies such as Eldorado are using the crisis in Greece for their own gains, moving into a country so desperate for investment it will settle on ungenerous terms.

However, Nicoletopoulos says Greece needs these projects given the current economic climate, and what they provide isn’t only potential for financial gain and employment, but international credibility.

“They could provide, first of all, something that Greece needs very badly right now, credibility versus foreign investors – an intangible thing called credibility. Then the tangible thing called the mining investment sales – foreign capital coming in, and then a lot of employment in a region where there is very high unemployment. Then also exports, which will improve our ailing balance of payments,” he explains.

When all the mines are in full operation, Eldorado estimates they will boost Greece’s exports by one billion euros a year. Nicoletopoulos also believes protesters are scaring this kind of valuable international investment away.

“What would you think if you were a foreign investor? It’s quite negative. Not very many people want to invest where someone will burn them alive,” he says.

He suggests the government should start a public relations campaign to smooth things over and better inform the public.

“Any international mining company coming into Greece will have to deal with a persistent anti-mining attitude.”

The question put simply is can a country in its sixth year of recession (the last EU bail out loan in November 2012 was for 44bn euros) really turn down the opportunity for growth in a billion dollar sector such as mining?

Nicoletopoulos says: “The only way for the industry to grow is the gold projects. I don’t see any other areas of fantastic growth, maybe some industrial mineral projects here and there, but the big ones will be the gold projects.”

However, any international mining company coming into Greece will have to deal with a persistent anti-mining attitude. Kadoglou confirms that people generally mistrust mining companies and many feel the country is too small and overpopulated for large-scale mining.

“There is an anti-mining sentiment, mainly caused by two factors: one is the mess that previous mining companies left behind. The second factor is that people see that mining obstructs the development of other economic activities. This new kind of “development” brought by Eldorado…frightens people,” she says.

Skouries is largely expected to go ahead and Nicoletopoulos says he thinks it will, but he doesn’t know “when and how”, while Thrace, according to recent reports, also looks set to go ahead. If it does it could be the start of a gold mining boom in Greece, making it Europe’s biggest exporter – if investors aren’t already put off.

Nevertheless, it’s unlikely to be a smooth progression for Eldorado, as Kadoglou reinforces: “I strongly doubt the Skouries mine will ever be able to operate smoothly,” adding: “Gold mining can’t even “rescue” this part of Halkidiki, let alone the Greek economy!”