While no one is looking, the Greek government goes on a rampage. 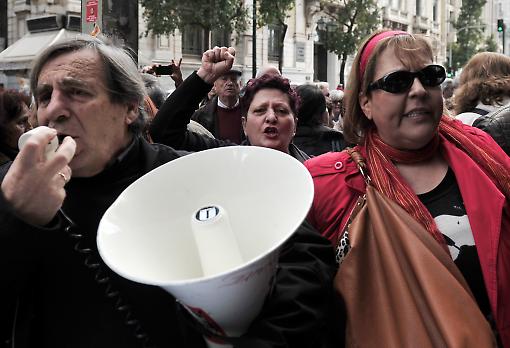 Greek pensioners demonstrate outside the Labour Ministry in Athens against pension cuts and the downgrading of the social health services. Photograph: Getty Images

There’s no element of surprise in the fact that things move faster when going downhill. In the wake of revelations such as the alleged torture of detained anarchists and the crackdown against activists in Skouries (Northern Greece), the Greek government and especially New Democracy has decided to use the “rule of law” in order to tighten its grip of the Greek media while at the same time winning back some of the voters they lost to the Golden Dawn.

Following PM Antonis Samaras’ own anti-immigrant rhetoric, 85 New Democracy MPs proposed a bill which would see only citizens of “Greek race” hired in police and military [2]. The Golden Dawn was of course quick support it and to claim the proposed bill as “a major victory” for them. “The honourable uniform of the Greek armed officer will not be handed to the Albanians, the Asians and the Africans and the country’s armed forces will not come under the control of foreign spies,” the statement released by the party on Tuesday continued.

This follows weeks of extreme anti-immigrant and anti-leftist messages released by minor members of ND in social networks and interviews, their futile attempts to out-flank the far-right only strengthening the neo-nazi party’s current, that now sees six year-old kids brought in to it’s HQ’s for classes on “patriotic awareness”. [3]

But this is only one side of the PR machine the coalition’s ruling party has set in motion: we’ve also had major moves against journalists and newspapers that speak out against their plans. Most striking example is the case of UNFOLLOW magazine, an independent left-wing publication, who saw its writers receive life threats after publishing an investigation on oil smuggling that appears to implicate Aegean oil and its owner Dimitris Melissanidis. A man who identified himself as Melissanidis threatened to “blow up” the reporter behind the article [4]. The magazine went ahead and sued the oil magnate whose business ventures include contracts with the US Navy. But what is interesting here, is that after the magazine published the incident, Melissanidis requested the retraction of the article through his lawyer who none other than Failos Kranidiotis, personal friend and advisor to PM Antonis Samaras.

This could be an isolated incident if days later another on hadn’t followed. This time, Avgi newspaper (official newspaper of SYRIZA) published a detailed report on how Samaras and ND are moving their chess pieces in order to completely take over media landscape and narrative. One of the main targets of the report was the owner of Parapolitika newspaper, who then sued Avgi for defamation. The interesting detail here is again the man spearheading this legal attack: Makis Voridis, representative of ND in the parliament, minister under the Papadimos government and of unmistakably far-right beliefs and past [5]. The same man dismissed the threats against UNFOLLOW as “insignificant” when asked in the parliament. The magazine told the New Statesman:

Obviously, filing a law suit was necessary in order to protect our reporter. But this is a wider issue. Behind the more visible aspects of the crisis, there are hidden opportunities for a number of people, a network of behind the scenes movers and shakers who are not used to having their plans exposed. The pretext is always boosting the economy. But the reality is fast-tracked privatizations and investment deals with little or no benefit for the state and often dangerous to Greek society. The gold mines in Chalkidiki are a case in point. Water privatization is another. OPAP, where Mr Melissanidis is a contender, is yet another. These policies are made possible through a network of politicians and magnates, who control large sectors of the economy, such as construction, shipping, mining, and of course the mainstream media. It is no mystery why they are so annoyed, when their machinations are made transparent. So, even if in Greece most media seem to have abandoned the idea of independent journalism, we believe that our job should remain providing the public with a way to assess what the government is doing. We will continue to do so, threats or no threats.

The purpose of this attack is in fact obvious. A frontpage by the Giorgos Bobolas-owned newspaper Ethnos today (the businessman behind the incidents in Skouries [6] and Keratea [7], and one of the owners of pro-government tv station MEGA) attacks vocal left-wing TV journalists and reporters [8], trying to implicate them in a financial scandal with zero evidence. These are the people who, in the past, have cracked stories exposing corruption in the banking sector and who are out of censorship’s reach because of their relationship with the international media.

The magnitude of the attack against independent voices is unprecedented. Since the publication of the Lagarde list by Kostas Vaxevanis [9], we’ve seen countless attempts by the government and affiliated private interests to attack and intimidate journalists. They’re set upon dominating over the public discourse, running singularly on immigrant-bashing, ideas of racial purity and demonisation of the left, their efforts thwarted by the rise of independent voices who pick apart the propaganda and speak of what is happening in the background. Because all this is of course a front.

The modus operandi is obviously to attract public opinion away from the odious privatisations program and shameful investment schemes like that of Skouries, where the state saw a $12bn dollars worth of gold and copper mine, sold for $12m with no rights on future revenue apart from a meagre 10 per cent tax. The silencing of “annoying” voices aims to cover up exactly these moves that rob the Greeks of wealth in exchange for nothing but empty promises for future growth. To cover up for a scheming banking sector that only seems able to give out loans to TV stations that perpetuate the government’s line. To play things down when a party member the PM himself declared as “honorable” on live TV gets sentenced to life in prison [10] for corruption. And finally, to cover-up for a government that has pushed the Greek society to the brink, in order to see its agenda enacted without resistance.

As the police is used once again as an occupying force in places like Skouries, the Greek government has decided you should not hear about it. If someones silence can’t be bought, other means are also available, and New Democracy’s legal experts can be used to defend private interests regardless of the fact they are also members of the parliament like in the case of Makis Voridis. Does this clash with the very idea of a functional democratic state? Absolutely. But nonetheless, this is what’s happening in Greece. If New Democracy gets its way, a fully “Greek” police force will make sure you never hear about it.